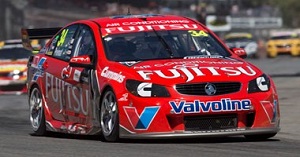 It's a tough life at the Top End and Director, John Hayes, Lead Foreman, Norm Harris and Project Manager, Ross Carmichael from the Johnny Cool Team took on the V8 Supercar challenge at the Hidden Valley Raceway in July this year. After another hot week on the tools, this trio struggled through a team building day courtesy of Fujitsu. The day was spent trying desperately to hold a team meeting discussing future projects, vain attempts to be heard over the ear shattering sounds of V8 Supercars careening past their air-conditioned club house, the smell of jet fuel lingering in their noses, while they reluctantly forced themselves to sip on cold beer and nibble platters of gourmet delights, an exercise in futility..... and frustration;

Hard to fathom how these guys could stand it really isn't it? But it's true and thanks to Fujitsu General in conjunction with Garry Rogers Motorsport (GRM) Johnny Cool staff spent the day cheering on Scott McLaughlin and Alex Premat as they pushed their 650+horse powered Holden's around the Hidden Valley Racecourse.

We won't go into the results; it's not necessary or relevant really when you see the pictures .... Let's just say that as a Dealership for one of the largest Air Conditioning Companies in the world, there are definitely perks. Proving no matter what they tell us on Monday, it's not all blood sweat and tears at the Johnny Cool salt mine!